I don't know whether you've noticed this, but cosmetics companies want your money, and they're constantly coming up with new ways to get you to pry your wallet open.

I'm not going into the "product disguised as charity" or "awareness-increasing" pink-colored folderol that comes at us every October, except to say that I'll believe a company is doing some real good when they're donating their money, rather than mine.


These days, it seems every company has a cash cow--a product that is so amazingly profitable that they keep expanding the line to increase sales. With Urban Decay, it's the Naked line; with Too Faced, it's the Chocolate Bar/edible eye shadow palette. High end department store lines don't tend to branch out endlessly. Skincare can get iteration after iteration—look at the proliferation of products that started with the original Creme de la Mer. But stuff that is matched to your skintone--how can you keep coming up with innumerable ways to buy the same Porcelain Princess foundation/powder/concealer? It's impossible.

Or it was impossible, until Yves St. Laurent decided to keep expanding and repackaging their best known product. 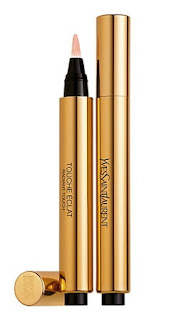 I remember the original Touche Eclat ("touch of radiance") because I read about it when I was in England. An English magazine--either Tatler or Harpers & Queen had printed an article where heads of makeup companies were asked which rival company's product they wished their company had invented. I can't remember who, but one person said that he wished his company had invented Touche Eclat.

The original Touche Eclat was the first product packaged in a click pen. It came in only one shade. It's now available in twelve shades, and reportedly, a Touche Eclat is sold every 10 seconds. At $42 each, that is a hell of a cash cow. It's not surprising that YSL has broadened the product line to include Touche Eclat foundation, primer, foundation brush, blur perfecter, and neutralizer.


YSL has also decided to package the Touche Eclat in a variety of different designs. Apparently, this has been going on for a while, commencing, I believe, with the 20th anniversary of the product in 2012. First there was the 20th anniversary packaging, followed by beaded, leopard, polka dot veiling,

and Slogans for this spring. If you're curious, you can see them all here.

Ceci n'est pas un pipe. Thanks and a tip of the hat to René Magritte.

I enjoy a cute slogan on a coffee cup or cell phone case. But I can do without motivational speeches from my fucking concealer Luminous Touch.

Also, can you imagine the decision-making process? Which of the twelve shades and three slogans is more me? And just imagine if the one I decide upon is out of stock. The HEARTBREAK.

I'm left wondering what exactly is the point? Is there actually any practical purpose, or is this just a money grab in disguise as frivolity?

I suppose a new design arriving in stores would serve to remind you that your Touche Eclat is old, and you might want to give serious thought to acquiring a fresh one. Other than that, it's a puzzlement.

Also, I'm trying really hard not to imagine a beauty product junkie gloating like Gollum over her collection of limited edition Touche Eclats, but the vision will popping into my head.