Folks, one of the two Buxom offspring has flown the nest. We spent a lot of time working on college applications, and he got accepted at all of his schools, but the idea of a gap year was just too enticing. So he's gone, but he's spending a second year as a high school senior, this time at the Interlochen Arts Academy, where he'll be studying motion picture arts. Then he'll go off to film school and become a famous director, and pretty soon I'll be blogging from his mansion in Bel Air. You heard it here first. 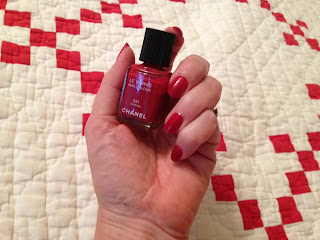 To complement it, my nails are a retro almond shape. Matronly? Pretty? Glamorous? Maybe a little of each.

Have you noticed the retro influences in fall clothes? One such influence is the resurgence of interest in navy blue. I swear, black has been the neutral of choice for over thirty years. Who would have thought that navy blue could look this fresh? Don't let the school girl connotations fool you (even if your kid, like mine, is wearing a navy blue school uniform.) Navy blue is just as slimming as black, and kinder to the complexion.

In a couple of weeks, my husband and I will be celebrating our 25th anniversary with a dinner dance. I'll be wearing this dress from Worth. 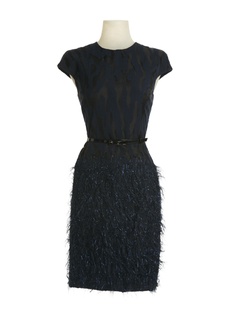 It's navy blue jacquard with feathers on the skirt. For that touch of Hollywood, darlings!

Why pay more? What's on sale at: